Put together a new acoustic pedal board yesterday.  Pretty much in line with my ongoing quest to simplify/streamline my gear, this board is even more refined than my previous one.  Just four pedals (Radial StageBug, TC Electronic Polytune 2, Mooer Radar with IR from 3 Sigma Audio and a TC Electronic Hall of Fame) all mounted on an Outlaw Effects Nomad Rechargeable Powered Pedal Board.  It’s light, battery powered and most importantly, sounds amazing!

Pleased as punch that my new album, “Who Said It Was Easy?” has been nominated for “Best Instrumental – Acoustic Album” for the 2019 ZMR Awards!  As the album title alludes, this was a tough record to make, so I’m particularly grateful for the nod.  Thanks to ZMR for the nomination and best wishes to the other nominees! 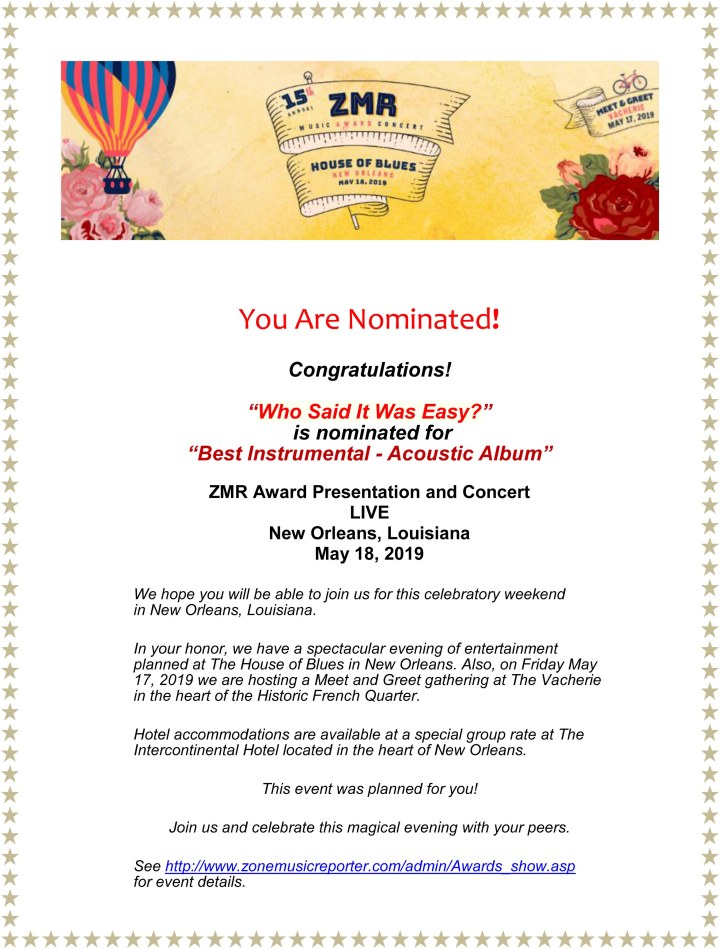 Thank you One World Music — appreciate the nomination! 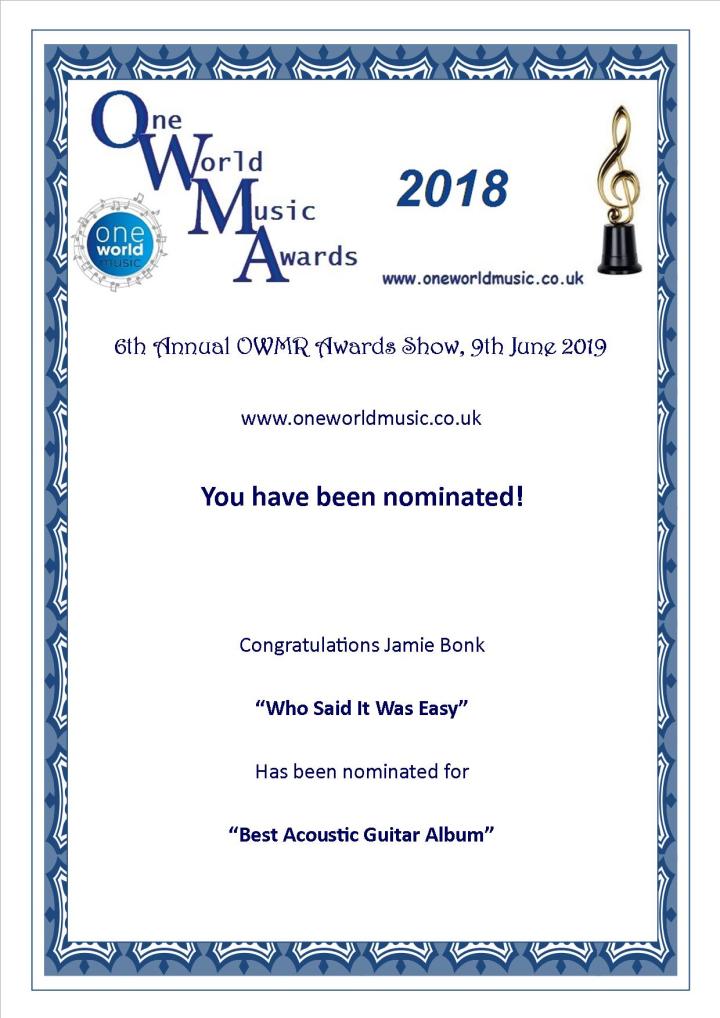 It’s been a year since the release of the last “No Tuition” interview and I’m happy to be back talking with guitarist/composer Peter Janson.  Peter’s one of the finest contemporary fingerstyle acoustic guitarists playing today and, as you’ll see in our interview, a terrific story teller as well!

Stream on Spotify and Apple Music

Fantastic review of my new album, “Who Said It Was Easy?”, by smooth-jazz.de .  Thank you Hans-Bernd Hülsmann!

Smooth-Jazz.de First View:  Jamie Bonk – Who Said It Was Easy?

My new album is here!  Fourteen melodic guitar-based instrumental tracks influenced by Jazz, Rock and Folk and recorded in beautiful Vancouver, BC.

I’m playing at the Satin Laser Spa Port Moody Anniversary Celebration and Cancer Fundraiser this Saturday, February 24th (11AM – 3PM). 50% of all service proceeds and 10% of all product sold this day will be donated to Leukemia & Lymphoma Blood Cancer Research. I’ll also be selling my CDs for $10 each and donating $5 from each sale. If you’re in the area on Saturday, please drop by the event and say hi!

Producer, guitarist and DJ, Taylor Hoy joined me for Episode #5 of “No Tuition”. Taylor shared some insights into his workflow, both for his own original music and for his remixes, as well as talking about his approach to the guitar. I think the interview turned out great and hope you enjoy watching it!

Episode #4 of “No Tuition” features musician/painter Ron Scott. We chatted about Ron’s artwork, his compositional process, his love of looping and his work on TV shows such as “Corner Gas” and “Antique Roadshow”. Ron was kind enough to perform a number of examples of how he uses his looper in a live performance setting. Even though I’ve known Ron for over 20 years, this interview gave me a deeper insight into both his music and his painting.

I'm a guitarist/songwriter who makes mostly introspective melodic music. I have released six LP's, two EP's, and two singles of my own solo recordings. Just about every day you can find me in my studio writing, recording and practicing.